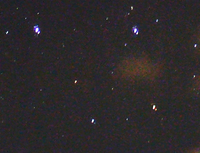 Travel. After my trip, I've been going through various emotions about my trip and travelling, unfinished thoughts sloshing loosely around in my head. I've had a blank page open on my computer for a day or two. I hoped if I left it open while I worked, over time I could make those thoughts concrete and cohesive. Just now, before I opened this page to write tonight, I stopped by some friends' blogs to read and say hello. Sallymandy had four wonderfully thoughtful quotes about travel.
The best I can explain it, is that travel both expands you and brings you closer. It's dizzying in its juxtaposition. New people, sights, smells, experience,s tastes, discoveries. These new experiences add layers: memories; knowledge; awareness; interest; viewpoints; culture; tolerance; understanding; curiosity.
I feel that with travel I get closer to understanding myself, my purpose in the world, my potential, my abilities and limitations, prejudices, and preferences . What does travel mean to you?
The picture at the beginning of this post is the constellation Crux, or Southern Cross. Some of you can view this every night. Some of us have gone a lifetime without a glimpse. One of my favorite songs of all time is Stephen Stills' Southern Cross. "When you see the Southern Cross for the first time, you understand now why you came this way." I believed the fallacy that one can only see the Souther Cross from the Southern hemisphere, so I had absolutely no expectation of seeing it when I was in BVI (the most Southern place I have every been). Yet, one early evening on our trip, I happen to glance at the sky just after sunset as we left a restaurant. I knew it immediately! It took my breath away.
The constellation was low on the horizon, directly South. It slipped out of sight too quickly, and was not visible most of the night. I looked for it every night thereafter, but every evening after that surprise glimpse, clouds covered the Southern sky during the brief time after sunset it would have been visible.
Now, I was not sure that what I saw was the Southern Cross. I had never even seen a picture of it, and as I said, I believed what I had always heard, "only in the Southern hemisphere." After all, what I saw was just a set of 4 stars in a kite shape. Was that a cross? I mentioned my discovery to a couple we met. "Oh, no," they said with certainty. "You can only see the Southern Cross...." They smiled a little at my naivite. But I knew I was right.
at July 06, 2009