New Puppy on the Way

Between business at work, evenings at the gym, coordinating a trip to Florida to visit my granchildren, and time spent on the New Puppy, I've missed blogging and visiting.  For this post, I'll describe the serendipitous, or maybe, spontaneous, or maybe jumping before one thinks, events that lead to me getting a New Puppy.

It started out on a random day, a Tuesday I think, during which I was struggling.  I wanted to make something good happen.  Yet there I was, lost in a sea of negativitiy.  Without any planning or foresight or even any thought, I suddenly stopped what I was doing, opened my web browser and typed in "petfinder.com."  I wanted to save something.  Change a life.  Rescue a loving heart from a cement floor, cage and likely death.

The page showed hundreds of thousands of animals needing adoption - where to begin?  All I knew was not much - I "heard" that shelters in the South are likely to euthanize unadopted animals.  I also knew that the shelters in this state did not.  Okay, well my dogs are Portuguese Water Dogs, my dog of choice: no shedding, no smell, smart, and trainable working dogs.  Not likely to find any of PWDs at a shelter thought, didn't President Obama already say that?  Only 13 dogs of that breed left in the 70's, few even heard of them before the President's gift from Senator Kennedy, surely betweeen scarcity and new found popularity, what is the likelihood that one would have been so carelessly discarded in a shelter?

My search for a PWD resulted in about 14.  Huh!  More that I thought.  As I looked at the sad pictures, like innocent line-ups, I saw that they were all mixed breed (not that there is anything WRONG with that!), or from California (too far!)... except wait a minute....  There was the worst line-up photo I had every seen.  Just the top of a black head, one white toe peaking out from the body in a weird, floating photo angle.  But, the flash on the cell phone that took the picture caught the unmistakeable sheen and wave of PWD hair on the top of that little girl puppy's head.  It looked JUST like my dog. 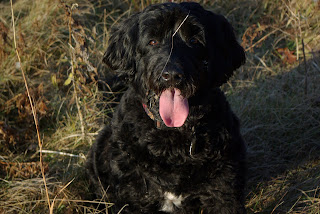 (That's my dog - not the line-up photo of the dog on the shelter.) Sheesh, I could not believe how terrible that photo was.  I mean really... these photos are posted to try to SELL these wonderful animals who so desperately need a home.  So, what possible justification is there in posting a photo of the top of her head?  It's bad enough that these dogs are black.  Black Dog Syndrome is a known phenomenon to shelters.  A local shelter even ran an ad before Thanksgiving for a "Black Friday Special," 50% off an adoption of a black animal, along with an explanation of Black Dog Syndrome as the reduced likelihood of a dog being adopted if it is black.  They believe that it is because it is more difficult to see their faces and eyes - and that a black dog does not photograph well.  Whatever the reason, fewer black dogs get adopted.

I called the shelter to ask about my top-of-the-head photo dog.  The shelter was in Florida.  The person who answered the phone could not give me a lot of information.  Just a few facts and assumptions plugged into the computer: female; arrived October 12th; stray; believed to be 6 months old.  The person did not know why she was "still there."  I asked why?  They just don't usually keep them that long, she said.  They have so many dogs, she said.  They must be saving her for the Pet Fair they were having in December, she said.  She did not know the dog.  The shelter was huge.  It held 600 to 800 dogs, 50 or so new arrivals each day.  You understand, she said.  We just can't keep them all.

My father lives an hour or so from this shelter.  I decided to call and ask him the huge favor of going to check this dog out.  I just wanted him to see what she was like - after all, I could only see the hair on the top of her head.  To his credit, he and my stepmother took this on as a project.  They are animal lovers, too.  It became a mission to save a dog, at least 1 dog of the tens of thousands who need love and a home. They drove there the next day and adopted the puppy on my behalf.  They decided it was no question that we would rescue her.  If I did not want her, then they would keep her.  Aside from being skinny and smelly from a month of kennel living, she seemed to have a sweet personality.  She had to be spayed, so my father had to leave her and come back a week later to bring her home.  The shelter was exceptionally clean, and she was as well cared for as she could be.

Now she's been at my father's for a week.  He's graciously offered to drive her from Florida to New Hampshire for me so she does not have to be crated in an airplane. He and my stepmother have bathed her, walked her miles, cleaned up puppy accidents, monitored her for chewing mishaps, and taken her to the vet's for lingering diarrhea.  She's had hookworm and tapeworm, and they can't travel with her until she heals from the spaying and diarrhea.  She's good natured and exhuberant and energetic and loves people and just wants to play.

So, my whim turned into a whole chain of events, which will soon culminate in a new addition to our family.
at November 29, 2009

This started with an idea to write a photo-journal to myself. In that journal, I would write and take photos of details to CONTEMPLATE the numerous sparkles of life I have around me, and CAPTURE them to last. So here I am, come join me....