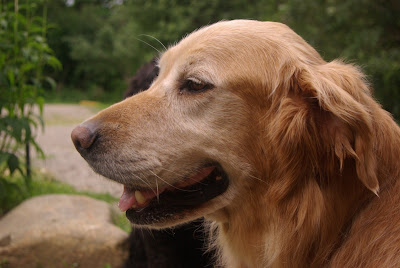 This week we received news that pet owners everywhere ultimately hear, especially with older dogs - a likely fatal illness has developed. Our Golden Retriever, Beau, suddenly exhibited symptoms of lymphoma. These were taken the morning he suddenly started acting very sick, lethargic and dull, the day he went to the vets. 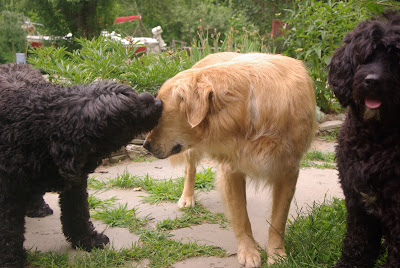 One of the other dogs, the "pack leader," was licking Beau's eyes (he frequently does this). Immediately after starting Prednizone treatment, Beau felt much better. But, now, after a few more days, he is acting sick again, didn't keep down his dinner. Will be calling the vet tomorrow. Pets hold very special places in our lives, yet they live such a short time compared to us, we end up loving and saying goodbye to so many. A cycle of joy and grief. Beau came to our little dog family of two Portuguese Water Dogs. His former owner kept him chained outside, behind the garage, we think at least most of the time, if not all the time: night; day; summer; winter. We believe he was beaten. His health was badly neglected. He had ulcerated ear infections, about 100 ticks, Lyme's disease, and heartworm. He also had food aggression. I found this behavior problem one night soon after we got him when he was licking his food dish under a cabinet and I reached down to pull it out for him and was attacked. I still have the scar on my arm. But Beau is also very sweet. After all the terrible experiences he must have experienced, his love for people is extraordinary(NOT, however, children). He craves being physically close and being touched. He must have suffered in loneliness being chained alone. 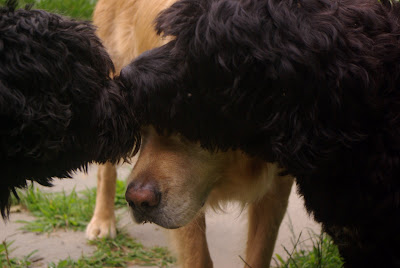 Now, he loves to lounge in our little pool on a "floatie," lie on his back on our bed between us in the morning, get his belly rubbed while he plays with a tennis ball. Do you have a pet story to tell?
at July 21, 2009