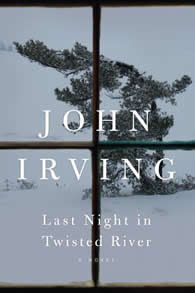 Several of you have asked me what I thought about John Irving's latest, Last Night in Twisted River.  Unfortunately, from the very first pages I was disappointed to realize that his writing simply isn't very good.  John Irving's talent instead lies in his imaginative plots, where characters do unexpected things and are very colorful.  Mr. Irving describes the North Country, as people from New Hampshire call the Northern parts of the state that border on Canada, very robustly, if not stereotypicallly.  The rougue North Country spirit is embodied by one of the characters, and he is facinating.   The other two main characters are not as interesting.  The son turns out to be a writer, educated at Exeter in New Hampshire, just like all of Mr. Irving's other books.

Because I was not inspired by the writing, though, I neglected it.  I let it sit for long periods unread and unloved.  So much time passed between resting and reading (it's a long book), that by the end I finally became fond of the main characters and wished I had paid more attention to them.  Still, I have to say, bad writing, bad plot, but loveable characters who grow on you.
at June 02, 2010