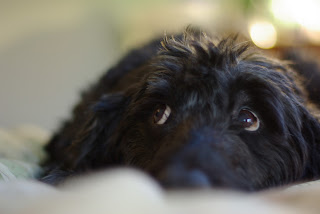 We're saying goodbye to another dog.  Lisbon, 13, seemed off yesterday: he had trouble walking, breathing and did not want to eat.  A trip to the vet, some x-rays and ultrasound revealed a malignant tumor in his spleen, and his spleen was leaking blood into his abdominal cavity.   Nothing to be done to save him, but he was (so they said) not in pain or great discomfort, so we brought him home.  They did not expect he would survive the night.  Today he is still here.  He is eating and drinking, and even took himself outside in the fresh 22inches of snow to relieve himself.

Although we realized it can't be too long now, this dog has already beaten a prognosis of death by cancer.  Three years ago, he was diagnosed with cancer of the nasal cartilage.  Then he was given months to live.  Well the vets still can't figure out what happened because, they say, dogs do not survive cancer.  I guess it's catching up with him now.
at January 12, 2011