All of a Sudden, It's August

It happens when you awaken one morning and it feels as if it is too early to get up.  It's dark.  Not night-dark, but dark in some sort of fuzzy, non-specific, sleepy headed way.  The pre-conscious impression is that it is still early yet. The light is dim, unformed.  The sun has not yet risen.  Or, maybe it's very foggy, or overcast.  At any rate, one's slightly more conscious mind thinks, I'm going back to sleep.

Then you catch sight of the clock on your way back down to the pillow.

And you know in your bones that it is August.  Still warm, even blastingly hot of high summer sometimes, but the sun is rising much later, and with that day shift you almost feel the Earth's weighty glide towards autumn.  Propelling you through seasons and time.

The morning's walk in the woods is silent of bird songs.  They are replaced by the rattle and plunk of falling acorns.  Crickets and cicadas buzz.  The light is flat and it, and lawns, are shifting to gold.  Nature's energy feels mature, ripe, unhurried. 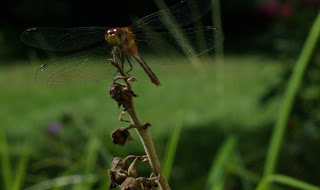 I think I know why summer seems so short.  Constant change.  From the first crocus pushing their miraculous petals through melting snow, to milkweed fluffs drifting over browning fields, the passing from spring to summer to fall is ever changing.  Series of flowers bloom, each according to its own clock.  Pop, fade.  Pop, fade.  Spot to spot in the garden, like the longest fireworks display imagineable.  Fruiting plants emerge colorful buds, to flowers, to fruit growing fuller and more colorful each day, and then drop to the ground.  Birds nest, hatch eggs, fledglings grow until they fly away.  The summer scene changes every week like the episodes of a television show. 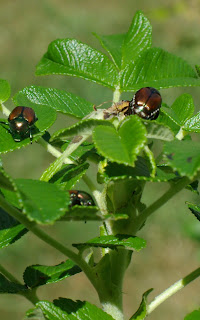 In contrast, winter is still, unchanging sleep.  Once the all green turns brown and black, and the snow falls, and the migrating birds have left and the hibernating animals burrow and sleep, the scene does not change.  Though birds flock to the feeder, they are the same every day, all winter.  No young ones getting bigger all the time.  No gradual shift of species from one month to the other, as flowers would: red ones flocking in December; blues ones arriving in January.

Maybe the change is more subtle.  The deer get thinner.  The snow changes consistancy.  I guess there is always the lengthening of days - but we can miss that all together when we rise in the dark, and return home in the dark for several months no matter the change.

How does one feel the passing of time in tropical places where Nature does not sleep?  Are there different rhythms of the cycles of life that simply go round and round, skipping that long pause of winter's quiet?  Does the light tell you what time of the year it is?
at August 14, 2010