sounds of love on Voyager

Friday morning I heard a touching love story on NPR (public radio).  As I was going about my usual morning routine, I became enthralled by the voice of the woman telling the story.  I later learned it was the wife of Carl Sagan, Ann Druyan.  She was telling the story of how she and Carl Sagan fell in love and married, and how a part of that process is now travelling through space on the Voyager spacecrafts. 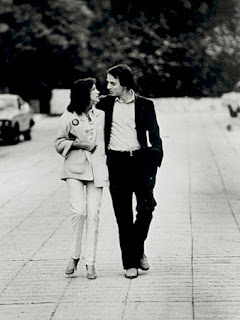 Druyan-Sagan Associates, Inc.
In the piece from Morning Edition, by Soren Wheeler and Jad Abumrad, Ann tells of the comaraderie between herself and Mr. Sagan as they worked together to create the golden record which was placed in the two Voyager spacecrafts launched in 1977.  "The records on board were meant to survive for a billion years, in the hope that some day, against enormous odds, they might cross paths with an alien civilization."  They were created to educate that alien civilization about Earth.  (see link to story below.)  Mr. Sagan was in charge of the project and Ann was the creative director.  The record included recordings of people saying "Hello" in 59 languages, the song of the humpback whale, a mother's first words to her newborn baby.

Ann and Carl worked together as nothng more than acquaintances colleagues for 18 months.  In one night that changed.  Ann had been working hard to find just the right piece of Chinese music for the record.  She excitedly called Mr. Sagan at his hotel when she discovered it.  During the conversation that ensued when he returned the call, they became engaged.  They had never even kissed.

Ann then had an idea for the record: if they could record electrical impulses in the human brain, perhaps whomever discovered the records sometime in the future could decode the information and understand our thoughts.  Two days after Ann and Carl became engaged, Ann had her own brain impulses recorded.  Of course at that time, she was feeling ecstatic and tremendously in love with Carl Sagan.  During the recording, she meditated on "the wonder of love, of being in love."  That recording was included on the golden record, still continuing its journey at 35,000 miles per hour through space, carrying the sound of a human body in love.

Listen to the show, or download the transcript at:
Carl Sagan And Ann Druyan's Ultimate Mix Tape
at February 14, 2010

This started with an idea to write a photo-journal to myself. In that journal, I would write and take photos of details to CONTEMPLATE the numerous sparkles of life I have around me, and CAPTURE them to last. So here I am, come join me....